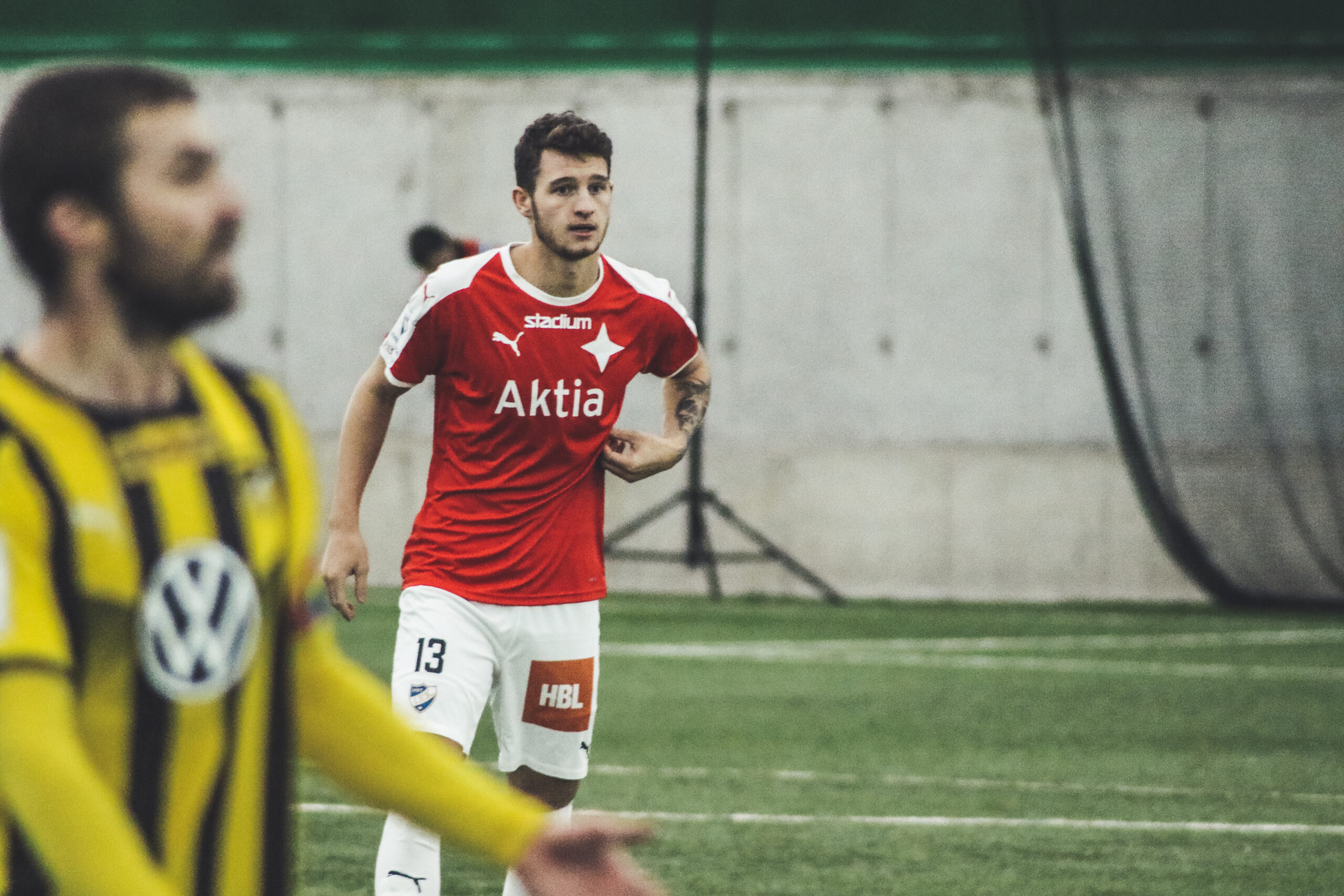 During the past weekend, HIFK has completed the transfers of four new players. Pipe Sáez, Juanan Entrana and Jake Dunwoody have signed permanent contracts, and Calum Ward has joined on loan from AFC Bournemouth.

Sáez, 25, is from the Spanish capital Madrid and has previously represented the academies of both Real Madrid and Rayo Vallecano. He has spent most of his adult career in the third tier of Spanish football, most recently at Laz Rosas CF.

– I’m an attacking player who likes to play in a team that has control of the ball. To come to Helsinki is a good opportunity for me, as I have never played abroad before. My first impression of the club has been really good, and I look forward to start playing and getting to know Helsinki better, said Sáez.

Sáez during the match against FC Honka on Saturday.

Ward, 20, joined AFC Bournemouth in 2013 and has since worked his way through the club’s academy ranks. Most recently he has played with Bournemouths under-21’s, but has on occasion also trained with the first team squad as well as being named in some of the first team’s matchday squads. Ward has also been a part of Irelands under-21’s youth national team.

– I’ve only played a couple of matches this season, so I wanted to join a team where I could get some more playing time. HIFK and Helsinki felt like a good option. There’s a professional coaching staff here and I think there’s all the necessary conditions for me to develop as player here, said Ward.

Ward stood in HIFK’s goal for the first time as he played the second half against FC Honka.

Entrena, 24, started playing football for his local club Granada. After a short spell at Sevilla, he joined FC Barcelona in 2011. After two years at “La Masia”, Entrena switched to RCD Espanyol and played there until becoming an adult. The forward has played three La Liga matches for Granada, and has also had spells at clubs like NK Rudes in Croatia and Omonia Nicosia in Cyprus.

– I wanted to come here to improve as a player. It’s a bit of a step into the unknown for me, since I didn’t know that much about Finland or the football here, but I’ve gotten a good impression of HIFK. Everything has been handled really well since I’ve arrived in Helsinki. I think I will get on well here, even though it’s still a bit cold, said Entrena.

Juanan Entrena was in the squad for the match against FC Honka, but is yet to play his first minutes for HIFK.

Dunwoody, 22, joined Manchester City’s academy as a child. Towards his later teens he joined Stoke City, where he spent his last five years as an academy player. He was team captain multiple season at Stoke. Last year he played Derry City in the League of Ireland Premier Division. Dunwoody also has experience from Northern-Irelands U21’s and played in both of the matches against Finland’s U21’s in the recent European Championship qualifiers. Dunwoody is also a familiar player for head coach Joaquín Gómez not only as both were at Stoke City at the same time, but also as Gómez has followed Dunwoody’s performances as part of his opponent scouting as Finland U21’s assistant coach.

– I sometimes trained together with Stoke City’s first team squad, and I also had two strong performances in the matches against Finland. So when Joaquín contacted me and asked if I would be interested in joining HIFK, it wasn’t hard for me to accept. As I’ve played against Finland, I know that there’s good football here. I saw a possibility of improving my own profile with this transfer. My goal here is to play a good season, develop as a player and help HIFK to achieve success, said Dunwoody.

Jake Dunwoody’s signing was announced at 12 o’clock on Saturday, and by 5 o’clock he had scored his first goal for the HIFK.

Dunwoody, Sáez and Ward all got their first touches of playing for HIFK as they faced FC Honka in a pre-season friendly yesterday. While HIFK didn’t get a win from this match (it ended 4-3 to FC Honka), Dunwoody got his first goal for HIFK off the spot.