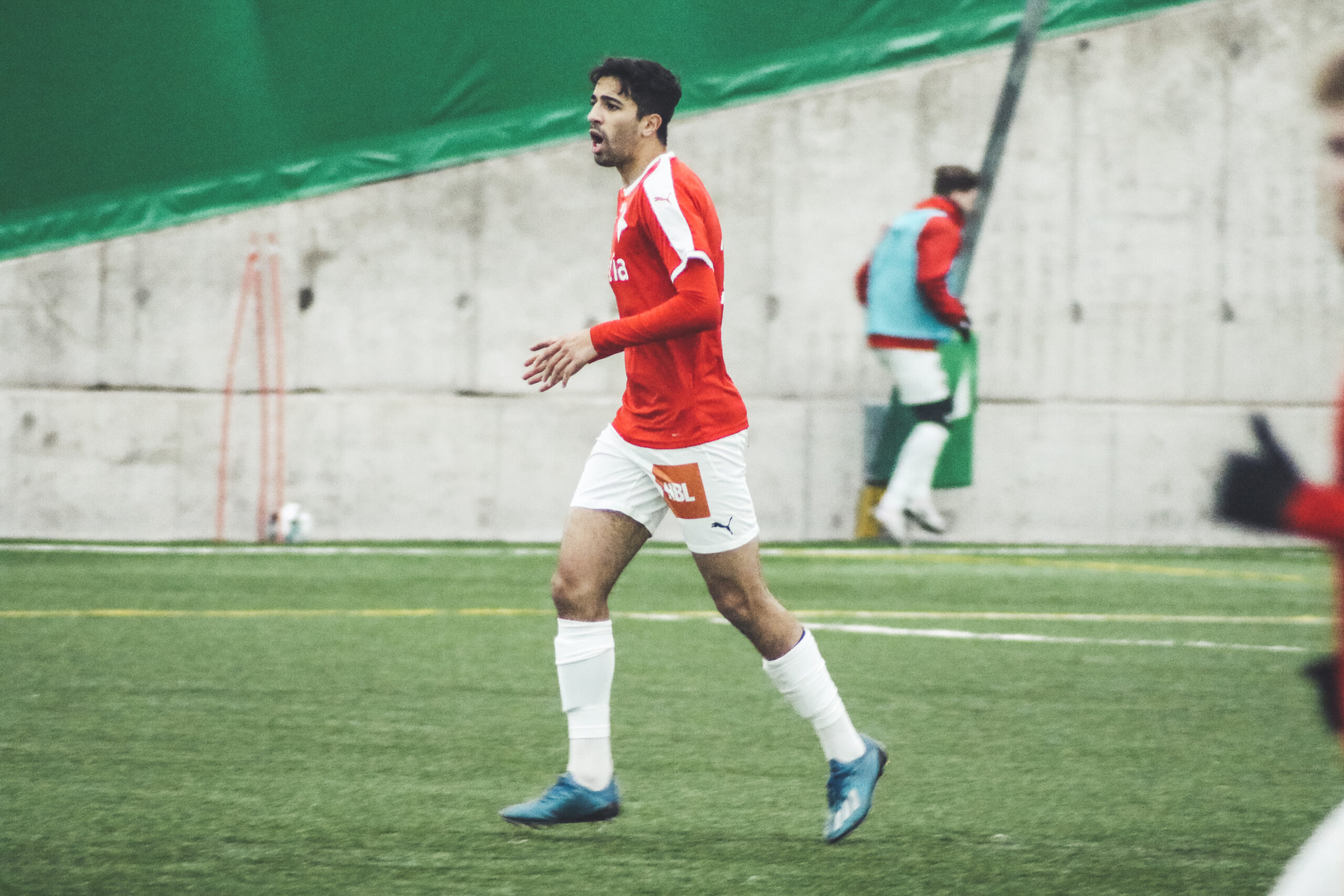 January kick-starts the season for HIFK

The new year also brought with it the beginning of a new era for HIFK Fotboll. After a quite tumultuous period ending in December, it was now finally time to go full steam ahead with the preparations for the 2021 season – all though a lot later than intended. On New Year’s Eve, HIFK had a total of five contracted players. Macario Hing-Glover, Sakari Mattila, Moshtagh Yaghoubi had signed contracts for multiple years when they joined HIFK, and Erikson Carlos was the first player to extend his contract into 2021. Jean-Claude Mabinda, who had a brilliant season att FF Jaro in Ykkönen, returned to home to HIFK where he once started his football career. Defender Selman El Baset joined from German FC Ingolstadt’s academy on loan. By this point, HIFK was still lacking a crucial piece of the puzzle – a head coach.

On New Year’s Day, HIFK announced that Aldayr Hernandéz would be joining HIFK. Hernandéz had previously played for the newly relegated TPS, scoring twice and making assist in 21 Veikkausliiga-matches. One week later, the long-serving all-round player Jani Bäckman, who has played in pretty much all thinkable positions (including once as goalkeeper) signed a one-year contract extension.

The following Monday, HIFK could finally announce that it had appointed Joaquín Gómez as its new head coach. Gómez had most recently been working as assistant manager at SJK and also as Finland U21’s assistant coach. Before arriving in Finland in 2020, Gómez had amassed a long career in England, working in different positions at clubs like Luton Town, Brighton & Hove Albion, Stoke City and Derby County.

Sports director Mika Lönnström commented the appointment with saying that Joaquín was “the best fit for what we are trying achieve with this three-year project”. He continued saying that the club would continue to “move forwards as a club with our ideology, values and a new spirit”.

The following day HIFK announced that it had hired Juhani Tähkävuori to assist with club developments. Tähkävuori will be working with developing strategies for both the sports department as well as sales.

The contracts didn’t stop there though. On Wednesday the 13th Hannu Patronen’s new contract was announced, on Thursday Martti Puolakainen signed a new contract and on Friday the long-awaited news that Jukka Halme was continuing was announce. A contract that was made possible due to in large of the support of HIFK’s supporters Stadin Kingit. The following season will be Halme’s thirteenth season at HIFK.

The first week of training involved a lot of trialists. By this point HIFK had a total of 12 contracted players. One of them, Erikson Carlos, is still recovering from his injury, making the number of contracted players available for training at 11. When HIFK played it’s first friendly on the 16th, against VJS, it played the first half with mostly contracted players and the second half with exclusively with trialists. The match was 1-0 to HIFK at the break, but ended in a 2-1 defeat.

– We played the first half with our contracted players and we were up 1-0 going into halftime. The 45 minutes they played gave them valuable playing time right after the first week of being back in training. I also enjoyed seeing some of the elements we’ve been working on in training playing out on the pitch. The match against VJS answered a lot of questions that have arisen after our first week together, said Joaquín Gómez.

– The second half we played with only trialists on the pitch. We’ll continue with some of them in the second week of training. But for some trialists, one week of training and that second half has shown us that they just don’t have it in them to be playing top tier football for HIFK, head coach Joaquín Gómez continued.

One week later HIFK played a match against NJS. This time HIFK won 3-1.

– The NJS match was another step in our preparation. We have been putting down a lot of good work in the training sessions. We knew we’d be facing a team who didn’t know how we’d play tactically, so we tried a lot of the stuff that we’d been working on throughout that week, said head coach Joaquín Gómez.

– We dominated most of that game, exactly as we intended. We still had a large group of non-contracted players playing with us, but the overall quality was a lot better this week. We were in control of the match, created a lot of chances and we should have scored more goals than we did. But overall a good performance and another step forward, Gómez continued.

On the 26th Joaquín Gómez’ first team staff got a new member, when his old colleague and former Finland international Antti Niemi joined on a season-long contract. Niemi was originally supposed to assist Gómez during the first weeks of training but found being involved in day-to-day training with a club to be so satisfying that he decided that he could not turn down a season contract once offered one by the club. Niemi, who has worked as Finland’s national team’s goalkeeping coach since 2010, will work with both goalkeepers and outfield players at HIFK.

The past weekend has been no exception to the steady stream of announcements. A total of four new foreign players were announced. Pipe Sáez, 25, a former Real Madrid and Rayo Vallecano academy player who most recently has played for third division team Laz Rosas was announced first. The following day it was announced that goalkeeper Calum Ward, 20, from AFC Bournemouth and Ireland U21’s would be joining on loan. Later that day it was announced that Juanan Entrena, 24, who had spent some time in both Sevilla’s academy and at FC Barcelona’s La Masia as well as playing three La Liga games for Granada was joining HIFK. On Saturday the last of the four was announced when Jake Dunwoody’s season-long contract was made public. Dunwoody is a familiar face for head coach Joaquín Gómez as he used to train with Stoke City’s first team while in their organisation and also as he had faced Gómez’ Finland U21’s twice during the previous European Championship qualifiers.

As all four players had been cleared from their quarantine, they were all eligible for the friendly match on Saturday the 30th against FC Honka. As in previous matches, HIFK lined up with a large amount of trialists and made a lot of changes, to see that many players got some time on the pitch. During the first half both teams had chances, although FC Honka seemed to be the team controlling the match, with HIFK being busy breaking up their attacks. It was 0-0 at halftime, but the second halftime was all the more eventful. FC Honka went up 4-0 in a short time, but towards the end HIFK was awarded a penalty and Jake Dunwoody stepped up to the spot and put it behind former HIFK goalkeeper Otto Huuhtanen, who recently signed for FC Honka. After a mistake infront of goal (not unlike the mistake that was made when Sakari Tukiainen scored against FC Honka during the teams met up last September) due to HIFK pressing high up in front of FC Honka’s goal, one of HIFK’s trialists got the ball in great position and had no problem of putting it in the net to making it 4-2. The final goal of the match, came after a bizarre chain of events that eventually led to one of FC Honka’s defenders playing the ball back towards Huuhtanen, who was not ready for the pass and so the ball slipped past him and FC Honka’s own goal finalized the scoreline to 4-3.

– We’re still instilling our values and principals and creating the DNA of the new team. The game was planned into our training week, which focused mostly on our defensive tactics. So to meet FC Honka, a very good attacking team, was perfect. For most of the match, we were able to contain their attacks, but for a small part of the second half we couldn’t cope with it, and it was perhaps a little bit too much for us at this stage of our preparation. But we learned a lot about our defensive structure and it also highlighted some things that we need to work on. IT also showed us a bit about the squads charachter, to still manage to get three goals after being 4-0 down. We had to cut the match a couple of minutes short, due to their time slot running out. I felt like we could have managed to get a fourth one if we would’ve been allowed to finish the match, said Gómez.

– The training week before the Honka match saw a lot more contracted players and we’re getting closer to the squad that will eventually be our final one. We’re still expecting a few players to come in, but were getting closer. There’s still a lot of hard work to put in and it’s very much still a working progress. We have to develop our attacking side, to become a better, dominating team. But we are confident that we are going to be able to put together a very competitive squad for the first match, Gómez continued.

HIFK will now shift focus to the start of the competitive season, as they will face KTP, HJK and FC Lahti in the Finnish Cup. First up will be KTP, in Kotka on Saturday. The match will be closed to spectators due to current regulations, but televised through the Ruutu streaming service.

– We’re now moving away from a pre-season schedule and into a competitive training week. Every week will be preparation to go out and win the match on Saturday. After the cup is played – hopefully in late March – we will go back into pre-season mode and continue to work on getting better, becoming stronger physically and developing our principals so that we are ready when the league starts, said head coach Gómez.