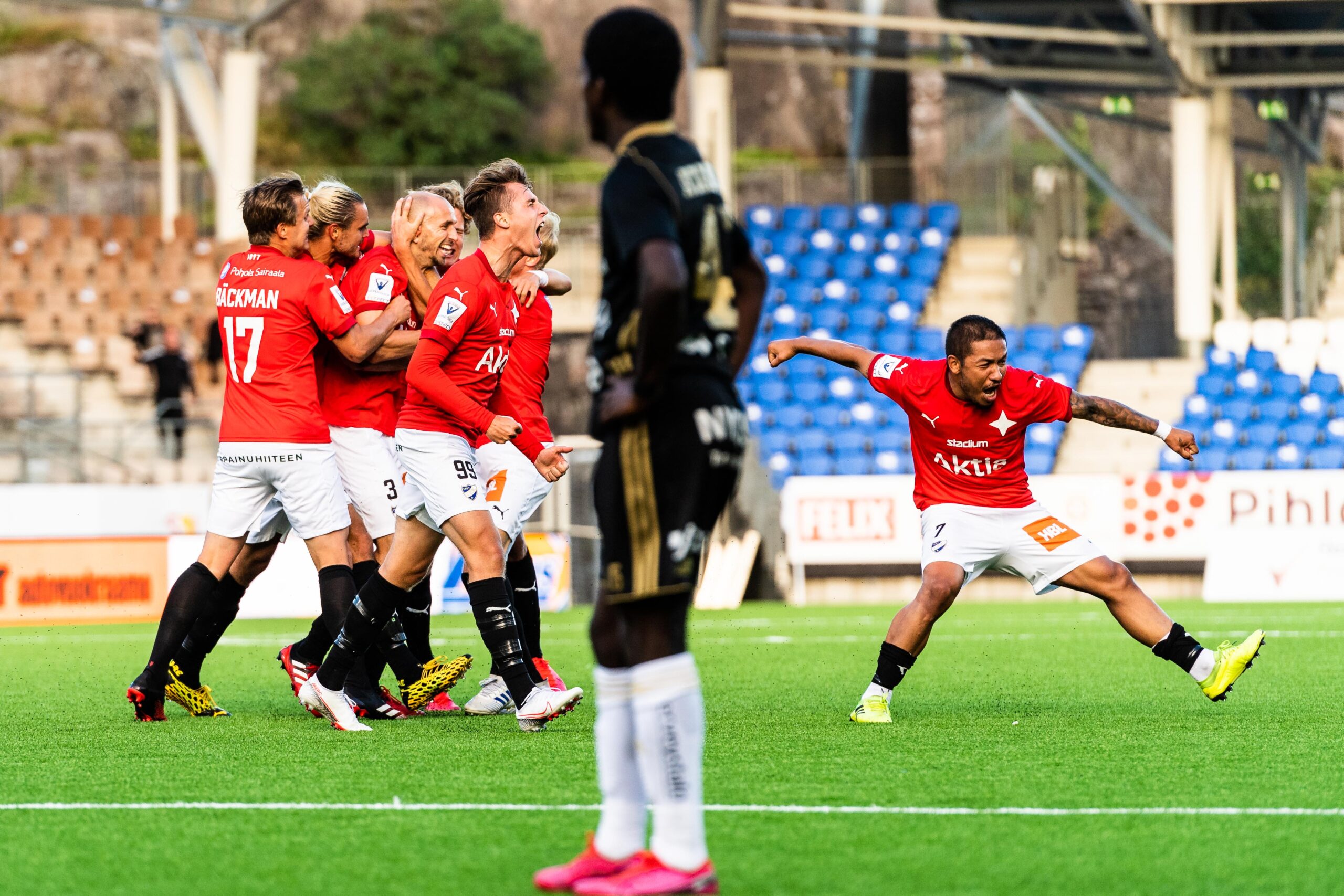 The year that went by

As we are closing in on the end of the year, it’s time to summarize some of the events that happened in the turbulent season of 2020.

After a somewhat disappointing end to the 2019 season, HIFK were eager to improve on their efforts and now finally make it into the upper half of the table. Some even estimated that the possibilities of clinching a Europa League qualification spot could be possible. Key players like Arnold Origi, Jukka Halme, Jani Bäckman, Riku Selander, Erikson Carlos, Hannu Patronen and more had already renewed their contracts in the summer and during the winter Joel Mattsson, Tuukka Andberg, Matias Hänninen, Sakari Tukiainen and more had penned a new contract and HIFK was able to keep Luís Henrique in the squad on a loan. New additions to the squad included Sakari Mattila, Moshtagh Yaghoubi and Joel Mero.

The team had high expectations for the Finnish cup, a competition that HIFK has been drastically underperforming in for many years. The first match of the season was against FC Honka in Tapiola. The initial kick-off was supposed to be the day before, but due to bad pitch conditions the match was postponed one day. Erikson Carlos scored HIFK’s only goal and the match ended in a draw. HIFK then lost against HJK and one week later again against newcomers TPS. As HIFK drew against FC Inter it meant that HIFK still had a chance if it won its last match against Mariehamn away. HIFK were up 2-0 on Åland after 80 minutes. But IFK Mariehamn did not give up and made it 2-1 in the 81st minute and on stoppage time equalized to 2-2. The draw meant that HIFK were out of the cup and another disappointing cup run was a fact.

Roughly a week later HIFK travelled to Side on the west coast of Turkey, for a training camp under the sun. While there, the team was going to face two Eastern European teams, MFC Mykolaiv from Ukraine and FC Rukh Brest from Bulgaria. Both of these matches ended in defeat for HIFK. So far things weren’t looking too good, but there was still time until the season kick-off in April.

But then all of the sudden the squad got even more time than they expected or needed. A few days after the teams return from Turkey, the government effectively put in place a lockdown. All football operations in HIFK were suspended and it was clear that the new regulations and the situation was going to have drastic effects on the upcoming season. The season was initially postponed until the beginning of June and the big question mark was if spectators would be allowed into the stands once it did kick off.

Several actions to reduce spending were put into place by the club, as it was not making any money and future income was at risk. This meant most of the clubs staff were furloughed and players agreed to reduce their salaries. What followed was a period of great uncertainty. The season start was pushed up until July, and at the beginning of June, Veikkausliiga finally announced the fixtures of the compressed season.

New infections were at a low by this period, so the discussion of whether it would be possible for spectators to safely come back into the stands was raised. It was decided that football teams would be allowed to take in 500 spectators per section as long as these sections were clearly cut off from each other. This meant a capacity of just under 2000 people for HIFK.

After almost three months of no matches, HIFK travelled to Tammisaari in the middle of June to face off against the Ykkönen team Ekenäs IF. HIFK controlled the match and ended up with a comfortable 4-0 win – its first win of the season. A week later HIFK played a second friendly, this time against IFK Mariehamn. Erikson Carlos scored early on in the match, and HIFK was leading for most of it, but once again the islanders managed to equalize in the last minutes of the match. After a total of 9 matches in 2020, HIFK had only managed to get one win. Still, expectations for 2020 were high, and supporters were eagerly awaiting the start of the season and being able to see some live football once again.

On July 1st it was finally time to kick off the new season. The fans were in their reshuffled seats (that kept the safety distances) and everyone seemed eager and ready for the season to begin. But that readiness was perhaps not reflected by the HIFK players on the pitch. KuPS scored three times within the first 15 minutes of the match, and it was game over before it had even properly begun. One week later HIFK faced RoPS up in Lapland. It was far from a perfect match, but Sakari Tukiainen managed to get his and HIFK’s first goal of the season and that was enough to win the match. On the 18th of July, HIFK faced off against FC Lahti at home. The result was, once again, 3-0 to the visitors. Many supporters left the stadium thinking something had to be done.

The following Monday, drastic (and to many, unwanted) action was taken. HIFK announced that it had dismissed coach Tor Thodesen from his duties. Assistant coaches Mike Keeney and Teemu Kankkunen were appointed co-coaches. All eyes were on the new coaches when HIFK faced SJK at home just a mere two days after the new coaching duos appointment. Sakari Mattila scored a beautiful free kick to make it 1-0 to HIFK. But as so many times before, the visitors managed to break through HIFK’s defensive lines and equalize late in the match. Fans were surely already explaining to themselves that “hey, at least a draw is better than a 3-0 defeat” when Moshtagh Yaghoubi stepped up to take a free kick five minutes into the six minutes of added time. He passed the ball to Riku Selander, who passed it back, and “Mosa” moved a couple of meters closer to the goal before sending it into SJK’s box. Inside SJK’s box were almost all of HIFK’s players. Sakari Mattila got his head on the ball, and it swirled past SJK goalkeeper (and former HIFK goalkeeper) Walter Viitala. A last minute goal is always special, but considering the previous losses at home and the change in leadership, there was undoubtedly a feeling of catharsis.

Some still speculated that this might be a one off thing. But as HIFK then won 3-0 against IFK Mariehamn, drew against Ilves in Tampere (a historically tough place for HIFK to get even one point) and won its matches against FC Haka and TPS, the mood of the squad and the supporters had certainly changed.

On the 14th of August HIFK faced FC Inter in Turku. HIFK had faced some weaker opponents like FC Haka and TPS and gotten away with good results, but now it was time to show what HIFK could do against a championship contender. FC Inter opened the scoring from the penalty spot, but Luís Henrique made it 1-1 shortly after with a beautiful shot from outside the box. Timo Furuholm made it 2-1 for the home team roughly 20 minutes into the second half,  but ten minutes later HIFK equalised once again. Luís Henrique was once again the right man, in the right spot, at the right time as he picked up the rebound from Adama Fofana‘s shot that had hit the post. A draw away against FC Inter would’ve been a good result for HIFK, which made it all the more frustrating that the referee awarded a second penalty to FC Inter in the 87th minute of play. Goalkeeper Arnold Origi was awarded a yellow card before the penalty and after Connor Ruane scored his second penalty kick of the evening, Origi continued to vent some of his frustration and got a second yellow. A very disappointing end to what otherwise was one of the best matches that far.

If the match against SJK in July set a positive trend in motion, then the FC Inter match in the middle of August set up a bit of a negative trend. HIFK were to face FC Haka at home and TPS away in under a week. Both TPS and FC Haka were having a tough time getting points, and many saw this as a chance for HIFK to quickly bounce back from the defeat against FC Inter. But what people think and what actually happens can sometimes differ. HIFK lost both matches 1-0.

The situation was worsened by the fact that Erikson Carlos, one of the brightest stars in the season so far, was out and would need surgery. And to add to that Luís Henrique had been recalled to Vejle BK. This left HIFK with few options up front. The pressure was on for Sakari Tukiainen to show that he was the man to take the reins.

HIFK faced FC Honka away in the beginning of September. After a massive defensive mistake by FC Honkas Lucas Kaufmann, Sakari Tukiainen retrieved the ball just outside FC Honka’s box and placed the ball behind Markus Uusitalo. After this HIFK adopted a very defensive tactic and managed to play out the clock and get three points from a tough opponent.

After the international break it was time for the season’s first Stadin Derby. Pundits speculated that HIFK didn’t have a chance. But as we’ve already once concluded in this article, what people think and what happens can be two different things. At the end of the first half it was 3-1 to HIFK, and spectators (certainly of both sides) were shocked. To make it even more dramatic, HJK equalized to 3-3. But HIFK didn’t give up. Once again Moshtagh Yaghoubi was standing behind the ball in the last minutes of the match. This time his free kick found Eero-Matti Auvinen, who scored and made it 4-3. HIFK had won its first Stadin Derby since 2016 – a massive upset for HJK – and the socially distanced partying was ready to begin!

The rest of the season was tougher and didn’t involve a lot of high points. HIFK would go a complete month without getting a victory after its historical win against HJK. The chances of HIFK reaching the upper half of the table were still there, but obviously worsened by the poor run of results. By the time HIFK got its first win in seven matches, against RoPS, the coronavirus situation had taken a turn for the worse. Teams were forced to go into quarantine as players had tested positive for the virus. Time was running out to find dates to play the postponed fixtures – let alone the Challenger and Championship series after the regular season. On the 29th of October, it was announced that Veikkausliiga would conclude at the end of the regular season. HIFK played one more match, against FC Lahti in Lahti in front of an empty stadium. The match ended in defeat and meant that HIFK would finish 8th the year 2020, which certainly was a disappointment for many supporters and the squad itself.

After the season ended, HIFK ended up in the newspapers for a completely different reason. The eventual conclusion of these events was that HIFK and Impress Europe parted ways. New investors will shortly be offered the chance to purchase shares in HIFK Fotboll AB through a share issue. The Finnish FA’s licence committee decided earlier this month that all Veikkausliiga teams, including HIFK’s, licences will be renewed for the 2021 season. So now all focus turns to the next year. Season tickets have been on sale since the 13th of November, and you can buy yours at lippu.fi/hifkfotboll