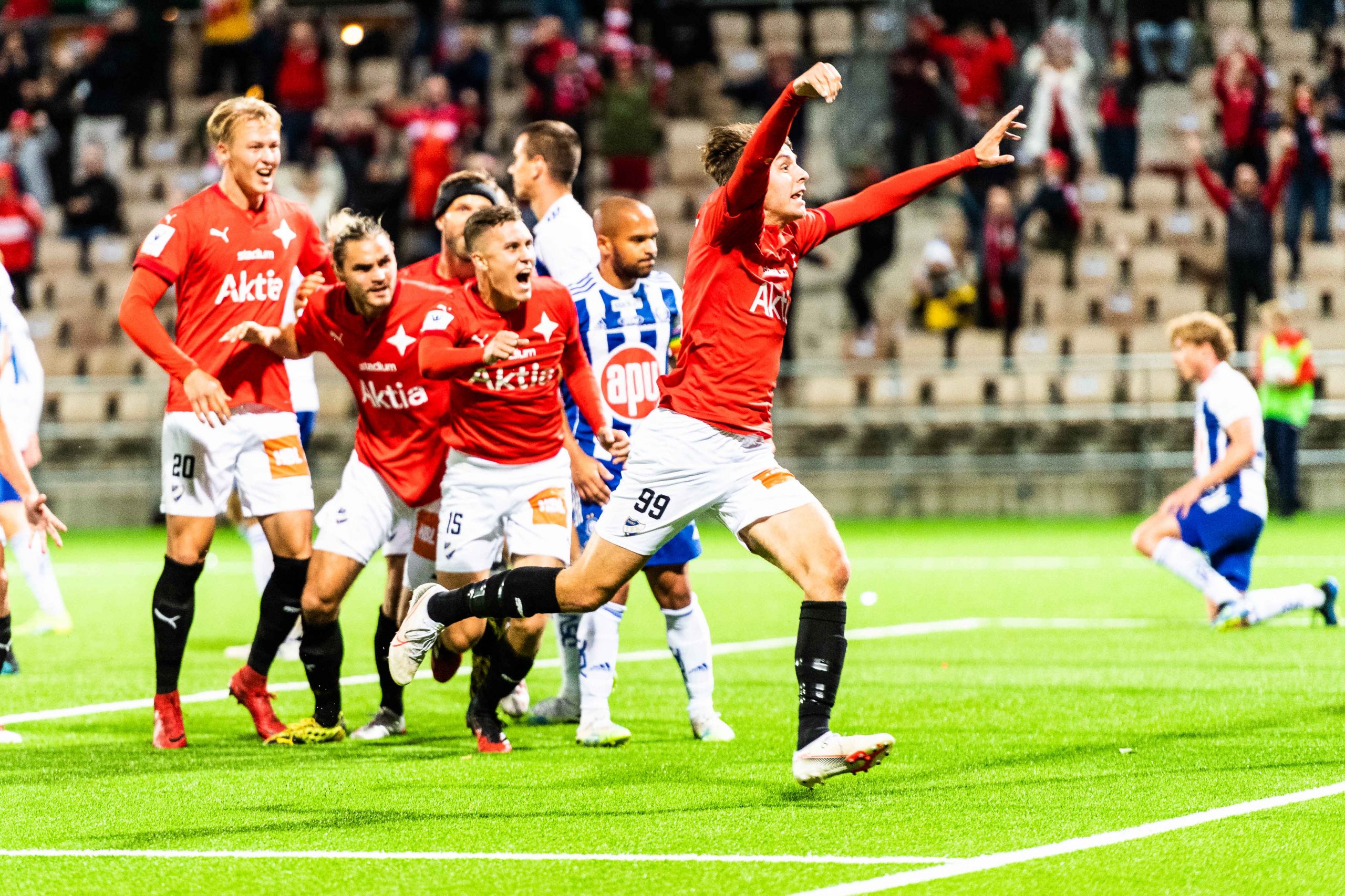 Derbywin, draws and more for HIFK in September

With October already around, HIFK are in the last month of the regular season. Due to the away match against KuPS being postponed until October, HIFK have a total of six games – four of them inside two weeks. But before we move to October, it’s time to take a look at how September went.

As we already mentioned in last month’s update, HIFK won against FC Honka on the 1st of September. Then followed an international break and after that it was time for a long awaited Stadin Derby, against local rivals HJK.

Just a few days before the derby, HIFK broke the news that star player Luís Henrique was being recalled to Vejle BK. The loss of an important player is never good news, so some HIFK fans were understandably concerned how this would affect the rest of the season and in short term, how it would affect the upcoming Stadin Derby. Luckily, when derby-day came around, these concerns were quickly and efficiently put to rest.

HIFK were in for a big challenge. HJK had been steamrolling through the league, only losing once in a total of 13 matches by this point. HJK’s offense was in form as well, as the team had scored a total of 31 goals, almost 10 more than the second-best team at the moment. Pundits had this pegged as an easy victory for HJK. But as we’ve mentioned a couple times before in these monthly updates, football isn’t always logic, and a derby is always a derby.

The game started off in exactly the way pundits had predicted, with HJK nearly scoring in the first minutes. But Arnold Origi was awake and ready in HIFK’s goal. HJK kept the pressure the following ten minutes, and it looked like it was going a one-sided ordeal. But the first goal wasn’t to be scored by HJK, but by HIFK.

After 12 minutes of play Vitinho got a pass to the left side from Jukka Halme, and played it forwards towards Joel Mattsson. Mattsson quickly turned around and was able to break free from HJK defender Valtteri Moren and passed the ball back to a sprinting Vitinho. Vitinho made a cross towards Adama Fofana who was waiting inside the box. Fofana was trying for a volley, but failed. But in failing the volley he succeeded in passing the ball towards Sakari Tukainen, who was waiting in front of goal. “Tuksu” was the right man in the right spot and steered the ball past Hugo Keto. 1-0 on the board, in what was a surprise for most of the 2900 people that were allowed intot he 10,000-seater arena.

A few minutes later HJK:s Markus Halsti tried to head the ball back towards teammate Ivan Ostojic, but in doing so made the perfect pass to a lurking Joel Mattsson. Mattsson started running towards the goal and Ostojic couldn’t quite keep up. Faced against Hugo Keto, Mattsson finished with precision and it was 2-0!

In the 23 minute HJK got a freekick just outside the box. Atomu Tanaka took the freekick that curved its way into the goal. 2-1 after 23 minutes and all of the spectators were sure that this was going to be a derby to remember.

Only four minutes later Adama Fofana was fouled inside the penalty box, and referee Mattias Gestranius gestured towards the penalty spot. Moshtagh Yaghoubi, stepped up to the spot and calmly but powerfully put the ball almost straight into the middle and Hugo Keto was once forced to pick up the ball from behind himself. 3-1 after 27 minutes, and this was already the most goals ever scored in a league derby.

During the break, HJK manager Toni Koskela reacted to the situation and made a total of four substitutions, bringing in the Daniel O’Shaugnessy, Lucas Lingman, Tim Väyrynen and Rasmus Schüller. The changes seemed to bring the wanted reaction as HJK started pressing even harder. For the most part Arnold Origi was there picking up balls from the air and the ground, but Roope Riski did manage to make it 3-2 in 52nd minute, and in the 80th minute HJK were given a penalty. Tim Väyrynen made it 3-3. The game moved into the last 10 minutes and HJK were putting ball after ball into HIFK:s box, and the HIFK supporters grew more nervous by the minute and felt like HIFK was about the crack under the pressure.

In the 89th minute, Eero-Matti Auvinen was running up the left wing when he passed to ball to Joel Mattsson who was fouled by Lucas Lingman. Free-kick specialist Moshtagh Yaghoubi stepped up to the ball. The situation did not look completely different from the situation that led to the 2-1 goal against SJK. “Mosa” was signalling towards the fourth referee asking if it was a direct or indirect freekick. He got was cleared to take the kick and it looked as if he was trying to reach go for a straight kick towards the front post, but HJK:s Rasmus Schüller put his head in between, trying to push it over the goal and out for a corner, but instead the ball hit his head so that I travelled further back towards the back post, where Eero-Matti Auvinen was. Auvinen outran Nikolai Alho and headed the balls towards the back of the net and the HIFK part of the stadium erupted into massive screams of joy, whereas the HJK fans were almost in shock. HJK was the team creating all the chances, but HIFK had withstood the pressure and now made it 4-3.

Just a few days later on the following Monday, HIFK faced FC Inter at home. FC Inter hadn’t been able to win for a while, and HIFK where fresh off of a derby win and hoping to transfer the energy towards into the match. What followed was a somewhat stale confrontation between the two teams that ended in a goalless draw. Both teams probably felt like they could’ve won the match, but in the end had to be satisfied with one point.

Next up was IFK Mariehamn at home. Mariehamn had played well recently and their star striker Albion Ademi was on fire, so HIFK knew that this wasn’t going to be an easy match. Vitinho scored the first goal with a beautiful shot from about 20 metres out, that went like a rocket past IFK Mariehamn goalkeeper Oskari Forsman. John Fagerström made it 2-0 after Riku Selander got a cross inside the box from Joel Mattsson, and passed the ball backwards to Fagerström who had an open goal. Sakari Tukiainen had a chance to make the numbers 3-0 just before halftime, when he was alone against the keeper, but couldn’t quite manage to get the ball into the net.

The second half IFK Mariehamn started to push back. Gustaf Backaliden scored and made it 2-1. Minutes later Akseli Pelvas made scored and made it 2-2. HIFK tried their best to get in a winning goal, but the match ended in a massively disappointing draw.
Because of KuPS advancing in the Europa League qualifications, the away match against KuPS was moved forward. This meant that HIFK wouldn’t play until the 28th of September, when HIFK travelled north to face off against SJK in Seinäjoki.

Seinäjoki has been a tough place for HIFK to play, having never won there, and it would prove to be so once again. After 26 minutes, Joel Mero fouled SJK’s Tuco inside of the box. After SJK playes fought over who was going to take the penalty, Tuco was eventually the player to step up to the spot and also managed to get it behind Arnold Origi. Seconds later, Jake Jervis doubled SJK’s lead to 2-0. HIFK’s game didn’t work at all during the first half and something drastic was needed for the second half.

In the 52nd minute of the match, HIFK were awarded a freekick. Freekick-specialist Sakari Mattila was going to take it. Mattilas shot flew high over the wall of SJK players infront of the goal and just into the far left corner. Jesse Öst was helpless and in the situation and watched as the ball went in. 2-1 for HIFK, and the chase was on!

HIFK tried to up the pressure and create more chances, and they even had some. But the job in hand got even tougher when SJK made it 3-1. Vitinho scored a goal in stoppage time, but that ofcourse was not enough. The match ended 3-2 for SJK, and HIFK suffered their first loss in September.

Now next up is the last month of regular season, containing a total of six matches including three home matches against FC Honka, Ilves and RoPS. HIFK will also start selling tickets to the away fixture against HJK, due to a mutual agreement to share the ticket capacity in both regular season derbies.